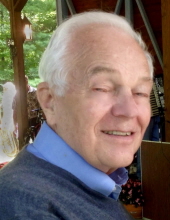 Robert Nelson was born June 21, 1935, in Escanaba, Michigan, husband of the late Jessie Huthwaite Nelson, son of the late Elmer Norris Nelson and Merle Johanna (Logerquist) Nelson, and father of the late Eric Thelander Nelson. He grew up in Sault Ste Marie and eventually moved to Pontiac, Michigan where he attended Pontiac Central High School and met his wife-to-be; he graduated from there. He went on to graduate from Michigan State University and then attended University of Michigan Dental School and obtained his DDS degree. In dental school he also attended Navy ROTC and upon graduation went into the Navy as a dentist and served on the USS Essex, an aircraft carrier. He married Jessie Catherine Huthwaite September 6, 1959.
He started his dental practice in Saginaw, MI in 1961 and continued to practice in Saginaw until 2019. During his time as a dentist he also became a fully certified and licensed acupuncturist and practiced holistic dentistry, which included additional studies in the disciplines of homeopathy and nutritional protocols with kinesiology. This multidisciplinary approach to health and wellness allowed him to help many people who had significant challenges with their health. His other avocations included many outdoor sporting activities, of which fly fishing was chief. He loved the sport of fly fishing and became involved in Trout Unlimited during the organization's infancy; serving as the sixth President of the William B. Mershon Chapter in 1968 and 1969. During his tenure he was very involved in work with TU initiatives that required many visits to Lansing to work with the DNR Water Resource Commission on water quality issues and trout fishing laws as we know them now. He was a lifetime member of Trout Unlimited, a member of the American Dental Association, and a member of the Holistic Dental Association. He, along with his late wife, was an active supporter of Police, Firefighter, and Veterans Associations.
Surviving him are: a sister, Mary Butora, Mayfield, MI; two brothers and their wives, Jan and Doralie Nelson and James and Xuelian Nelson; his children, a daughter and one of his sons, and their spouses, Erin and Paul Ricciuti, Davenport, IA, David and Melinda Nelson, Matola, Mozambique, Africa, as well Mary C. Nelson, Davenport, IA, wife of his late son Eric; two granddaughters, Jordan and William Coutret, Denver, CO, and Remington Ricciuti, Atlanta, GA; additional “adopted” grandchildren, in the family of David and Melinda, from Mozambique, Africa: Salina Machava, Fernando Sitoe, Monica Armando, Tarisai Razao, and Rafa Raphael and his spouse Tania and their son Kendrick.
A memorial service will be held in the future when the State of Michigan permits a reinstitution of large gatherings.
Those planning an expression of sympathy may wish to consider Cedars for the Au Sable, especially their Cedar Seedling Kit program.
To order memorial trees or send flowers to the family in memory of Robert Nelson, please visit our flower store.
Send a Sympathy Card