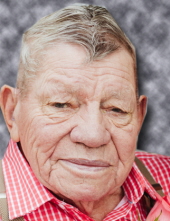 A truly great man, Robert Lee Strong, Sr., has entered into heavenly rest. Robert was born February 9, 1930 in Saginaw, MI to the late Sidney D. Strong & Anna A. Slaybaugh. He grew up in Merrill, MI and graduated with Merrill's High School Class of 1948. He began employment with General Motors that same year. In 1951 he was drafted into the U.S. Marine Corps and proudly served both home & abroad in Korea until his discharge in 1953. Robert married his beautiful wife, Arlene P. Holroyd, on September 8, 1954 in Angola, IN, she survives him. They had five wonderful children- Diane, Keith, Jacqueline, Cindy & Bob Jr.- who they raised on their farm property in Merrill, MI. Robert was consistently known to be a hard worker, often working two jobs & running the farm in order to provide for his family. Robert retired from GM's Grey Iron plant in 1980, after 32 years of loyal and dedicated service. He & his wife Arlene then went on to deliver the Saginaw News together for nearly 20 years. He was well known throughout the Merrill Community, was a member of the Merrill Congregational Christian Church and was a dedicated member of Merrill's Masonic Lodge #411 & Breckenridge's Order of the Eastern Star as well as countless other Masonic fraternities. Robert had a passion for auction sales and bringing home "treasures" to resell at his own yard sales. Robert was blessed with (11) Grandkids and (13) Great Grandkids (with two more on the way). They were his pride and joy and he spoiled them endlessly…especially with ice cream. In his later years, Robert continued to enjoy watching sports, watching his birds, playing cards and reminiscing about days gone by. He had an incredible memory and his mind remained sharp until the very end.

Honoring Robert's wishes, cremation has taken place. A private memorial for family will take place at a later date.
To order memorial trees or send flowers to the family in memory of Robert Lee Strong Sr., please visit our flower store.
Send a Sympathy Card