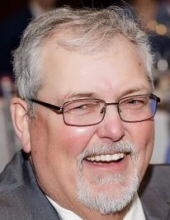 Loving husband, father, papa, brother, nephew, uncle and friend, Robert “Bob” Wesling of Freeland, Michigan, age 67, went to be with the Lord surrounded by his family after a long and courageous battle with cancer on September 22, 2020. Bob was born on March 14, 1953 in Mount Clemens, Michigan, the son of the late Leonard and Eva (Miller) Wesling. He graduated from Mount Clemens High School in 1971. Bob married his beloved wife, Carol (Reed) Wesling on March 18, 1998. Bob’s greatest love was his family. He is survived by his wife, Carol and children Neil Wesling (Joelyn Amo), Colleen (Joe) Tanner, Kyle Wesling, Mary (Jeremy) Eisenbrandt and Kara (Brett) Koch. Bob also leaves five grandchildren that were his pride and joy, and that he loved dearly, Adena Tanner, Allison and Autumn Schuhmacher, Sophia Tanner and Henry Robert Koch.

Bob retired from Peerless Steel in Saginaw, MI after 44 years of dedicated service. He was a member of Faith Evangelical Lutheran Church, and he had a strong faith and love for the Lord. Bob enjoyed golfing, traveling with his wife and family (especially Puerto Vallarta, Mexico), a good game of euchre, reading his favorite John Grisham books and listening to his favorite musical artist, Jimmy Buffett. Bob’s greatest joy though came from the love and laughs shared among his family. Family time was his favorite time, and he found such joy watching his grandchildren grow up. He had an infectious laugh and wit, and nobody told a story quite like he did. We will miss him in everything we do.

Bob is also survived by his sibling, Don (Pat) Wesling. He was preceded in death by his brother, Jimmy Wesling. He also leaves behind his special and beloved Aunt Karen and Uncle Dave, many beloved nieces, nephews, extended family and close friends.

Honoring Bob’s wishes, cremation has taken place. A celebration of life will be announced at a later date. Those planning an expression of sympathy may wish to consider memorials to their favorite charity.
To order memorial trees or send flowers to the family in memory of Robert Charles Wesling, please visit our flower store.
Send a Sympathy Card