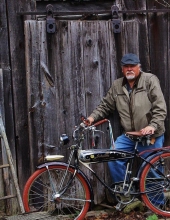 Passed away on October 26, 2020. Age 63 years. Randy was born on February 10, 1957 in Saginaw to the late Alonzo and Marlene (Hahn) Biermaker. He was a 1975 graduate of Bridgeport High School. Randy proudly served in the United States Army for four years. On August 10, 1985, he married Kelly O’Connor; she survives him. Randy enjoyed riding his motorcycle and bicycle, photography, and spending time with his family.

Honoring Randy’s wishes cremation has taken place. A celebration of life will be held at a later date.
To order memorial trees or send flowers to the family in memory of Randy L. Biermaker (Bier), please visit our flower store.
Send a Sympathy Card