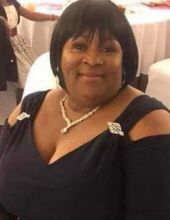 Marie accepted Christ as her Lord and Savior and worshiped at Harris Temple Church of God in Christ for many years before going to worship with her mother at Word of Faith International Ministries, where she was baptized in January of 2005. She became a faithful member, dedicated to serve Christ at all costs and was excited to serve as an Usher. Marie participated and encouraged others to dial into the prayer line. She woke up giving praises to God and going to bed doing the same. Every conversation consisted of you must know God for yourself, to have a very personal relationship with your Savior. She often said “You got to get yourself together” and trust God.

To know her was to love her. Her brashness but yet very caring heart is shown in her live Facebook videos where she spoke her truth and encouragement to herself and others. She will truly be missed.

She loved her family. She did weekly bible readings and devotion via messenger with her brother Darnell at the nursing home where he resides. She was an outgoing person who loved movies, going out to eat and spending time with her family. Her family meant the world to her, doing what she could to help in her own way.

Phyllis's service may be viewed here

To order memorial trees or send flowers to the family in memory of Phyllis Marie Hayes, please visit our flower store.
Send a Sympathy Card