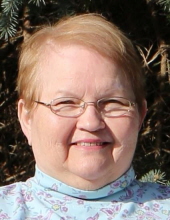 Nila Talik (Keller), 75, of Saginaw, MI, passed away on February 24th following a lengthy illness. Nila was born on December 13th, 1944 to Harry and Viola Keller in Saginaw, MI. After graduating from Michigan Lutheran Seminary in 1962, she worked as a secretary for several years and was a fabulous typist even into her later years. In 1961, she met a tall and very slim Frank Talik. After cooking for him a few times Frank was in love. They wed in 1966, going on to have three children, James, Renee, and Rick. While raising her children, Nila started volunteering and working as a cook at St. Paul’s Evangelical Lutheran School. She eventually became the head cook and was there for 25+ years. She spent much of her free time making delicious meals for others, taking care of her grandchildren, and spoiling them as much as possible. Nila took up many other side hobbies as well. She did a fantastic job decorating cakes and even made clothes for the family and cut all their hair – which her children still have yet to appreciate. She was also a dedicated listener to the radio talk show “Listen to the Mrs.” Nila had all but the first volume of their cookbooks, and you knew not to interrupt her or call while it was on.