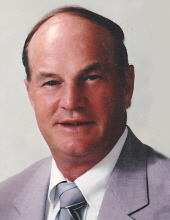 Murray James Brubaker, 85, of Saginaw Township passed away peacefully with his wife and son at his side after a brief illness on Thursday, December 31, 2020.

Murray was born on January 14, 1935 in Gladwin County, Michigan, the son of Paul Raymond and Lila (Haddix) Brubaker. He graduated from Gladwin High School in 1954. Murray married Lenora (Courtney) Brubaker on July 20, 1957 at Holy Family Catholic Church in Saginaw.

Murray was the founder and owner of Brubaker Builders in Freeland, Michigan for 50 years, building several homes in the Freeland, Midland, and Saginaw Township areas. At the time of his death, Murray was the oldest licensed contractor in the State of Michigan. He also worked for the Dow Chemical Company in Midland for 34 years, retiring in 1989. Through his tireless work ethic, Murray and his wife, Lenora, proudly financed all four of their children through college.

Murray is predeceased by his parents, brothers Richard, Robert and Russell Brubaker, and sister Alice Brubaker. He is survived by his brother Ralph (Ruth) Brubaker of Midland, and sisters Roszella (Bernard) Foor of Gladwin; Angelau (Wendell) Hoover of Grayling; and sister Lotta Mack of Montrose, Michigan.

Per Murray’s request, cremation has taken place with no funeral home visitation. A funeral Mass will be held at 11:00 am on Tuesday, January 12, 2021, with the Reverend Father Thomas J. McNamara and Deacon Roger Pasionek presiding at Christ the Good Shepherd Catholic Church, 2445 North Charles Street in Saginaw. Friends may visit with the family at church from 10:00 am until the time of mass.