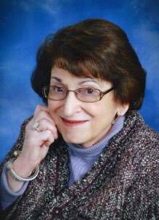 Mary Fote Kookootsedes, 88, passed suddenly on November 8, 2018 while visiting her daughter Jean, in Jackson, MS. She has joined her beloved husband of 66 years, Gust, after being separated for just under 6 months. Mary is survived by her children, Penny (Tod) Bradley, Jean (TJ) Hare, Christine (Jeff) Wolverton, her brother Alex and his wife Tina Fote, 11 grandchildren and 7 great grandchildren. She was preceded in death by her husband Gust, her parents Thomas and Janoula Fote and her twin sister Lula, who died when she was only 3 years old. Marys life began in Springfield, OH on December 29, 1929 where she resided until she married Gust on October 7, 1951. She and Gust moved to Midland shortly after their wedding and lived there until 2015 when they moved to The Woodlands, TX to live near their daughter, Penny. Their hearts never left Midland. Mary worked at Dow Chemical until 1954 when she became a full-time mom. Sewing, singing in the church choir, embroidery, cooking, music and reading filled her spare time. She belonged to an investment club, a book club, and was very involved in various church organizations and activities. In 1974, Mary went back to work outside of the home at the Midland Council on Aging. There she enjoyed helping people who needed assistance as well as being an integral part of a growing non-profit organization. She retired in 1990 so she could travel and spend more time with her grandchildren. Recently, she enjoyed posting and perusing Facebook on her iPad where she could keep up with her friends and family. Please join us for Marys viewing on Monday, November 26, 2018 from 5:00-7:00 p.m. at the W. L. Case and Company Funeral Chapel, 4480 Mackinaw Road in Saginaw, MI with funeral services on Tuesday, November 27, 2018 at 10:00 a.m., to be held at St. Demetrios Greek Orthodox Church. Memorial contributions may be sent to St. Demetrios Greek Orthodox Church, 4970 Mackinaw Rd. Saginaw, MI 48603.