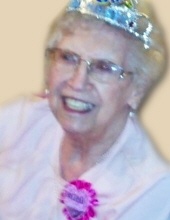 As a young girl, Marjorie was quite an accomplished athlete. Her volleyball team won the State of Michigan championship. In addition, she played basketball, baseball, learned Dressage on an English saddle, and waterskied on a board before skis became available. She enjoyed the Michigan winters, especially tobogganing and ice skating.
She was blessed with a beautiful voice and sang solos in her church and during school play performances. She was a popular girl and was also active in her high school sorority. She was voted best dressed girl by her classmates.

After high school, she worked for Dr. Raymond Hart, President of the Michigan Dental Society as a Bookkeeper, Dental Assistant, and later, with additional training, became a Dental Hygienist. After taking a hiatus from her career to raise her two daughters, she returned to work for Dr. Hart in her mid-fifties.

On December 13, 1941, she married William C. Henry. They were engaged and planning to have a wedding, but on December 7, 1941, the Japanese bombed Pearl Harbor and Bill was called back into the Army, so they had a hurried, small December 13th wedding. They lived in Texas, Oklahoma, and Louisiana. Their first daughter, Mary, was born in 1944; their second, Judi, in 1948.

Marjorie was a meticulous homemaker, extremely well-organized, as well as a devoted wife and mother. She never missed any of her children’s school or extracurricular events. She was often the school Room Mother and was her daughter’s educational and musical champion. She also sewed beautiful clothing for her daughters. Marjorie, Bill, and their children traveled throughout the United States and Canada. She was a very active member of the first Presbyterian Church of Saginaw. She belonged to two bridge clubs.

Marjorie and Bill built a house in Florida and moved there in 1980. They loved to dance, were excellent dancers, belonged to a dance club, and continued dancing throughout their 50 wonderful years of marriage, even after Bill had a stroke at age 75.

Marjorie received many awards for community service and her volunteerism. She also devoted much of her time to her church fellowship. She strongly supported the local Rescue Mission.

Bill died in 1992. After his death, Marjorie traveled with her daughter Judi and her childhood friend, Muriel Dersnah, of Midland, MI. Also, she was proud of the fact that she was the first women appointed to the Church Council, at the local Lutheran Church, which she joined with Bill when they moved to Florida. While attending church, she became friends with a handsome gentleman, by the name of Donald Leister. They married in 2001, a day before her 85th birthday, so that she wouldn’t be older than he on their wedding day. He was her Prince Charming, bringing her red roses every Saturday. They traveled internationally into their 90's. He was also a beloved step-father. Later, they moved to Winston-Salem, North Carolina and attended Epiphany Lutheran Church, where they made many wonderful friends. They had 11 loving years together, which she often mentioned were some of her happiest. Don’s children, grandchildren, and great-grandchildren were very devoted to her, using their vacation time by driving almost 1000 miles to visit her, after Don passed away.

Marjorie made friends during her travels and wherever she lived. The quality of her as a person showed in the way that she stayed in contact with and cared about her friends new and old, near and far, until she died.

She spent the past few years at Homestead Hills Assisted Living and then Skilled Nursing. She was very close with many of her Caretakers there and her Physical Therapist, who were like her family. She loved to entertain her caretakers and physical therapists with her jokes and sayings from a bygone era, because it made these young people laugh. Her Physical Therapy was her lifeline, and those PT sessions with her favorite Therapist were what she lived for. She worked hard many times to recover from a bed ridden illness to being able to stand and walk with a walker. Everyone was so surprised and in awe of her. Her determination and positive attitude, even when she was confined in her room because of COVID, remains an inspiration to all who knew her. One mantra that Marjorie lived by is if she was sad, she would always try to make someone else happy, thus helping others more than just her mood. This became a special attribute of hers and will live on with her family.

Her mind remained very sharp. She wanted her brain to continue working to help others so she donated it for medical research.

She has been her children’s and grandchildren’s biggest cheerleader.

Due to COVID-19, no public services will be held. Internment will be held at Forest Lawn Cemetery, in Saginaw, Michigan. Online condolences may be made through www.salemfh.com/. Salem Funerals and Cremations Reynolds is honored to serve the Leister family.
To order memorial trees or send flowers to the family in memory of Marjorie Schultz(Henry) Leister, please visit our flower store.
Send a Sympathy Card