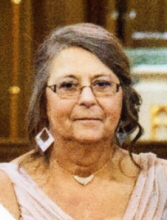 Haas, Lori Sue Saginaw, Michigan Beloved wife, mother, grandmother, sister, and aunt, passed away Thursday, January 26, 2017, at St. Mary's of Michigan, following a courageous and strong battle with cancer. Age 60 years. Lori Sue Gifford was born July 18, 1956, in Saginaw, the daughter of the late Raymond L. and Leona (Schradel) Gifford. She graduated from Eisenhower High School with the Class of 1974. She had been employed by Kendall Electric for the past 40 years. She was an avid reader and enjoyed playing cards and games. Lori was devoted to and enjoyed spending time with her family, particularly her grandson, Nic. She married Gerald J. "Jerry" Haas on May 21, 1976; he survives her. She also leaves two sons and daughters-in-law, Jay and Michelle Haas and Kevin and Christina Haas; her grandson, Nicolas; one sister, two brothers and their spouses, Cindy and Frank Alex, Rick and Doris Gifford, and Randy Gifford; one brother-in-law and two sisters-in-law and their spouses, James and Maureen Haas, Paula and John Galarno and Patti and Albert Rivera; many nieces, nephews, aunts, uncles and cousins. Besides her parents, Raymond and Leona, she was predeceased by a brother, Dave Gifford, a sister-in-law, Nancy Gifford, and her parents-in-law, James and Mildred Haas. Funeral service will take place at 11:00 a.m. Tuesday, January 31, 2017, at Bethlehem Lutheran Church, 808 Weiss Street. Rev. Charles Buckhahn will officiate with burial in Bethlehem Lutheran Cemetery. Her family will receive friends at the W. L. Case & Company Funeral Chapel, 4480 Mackinaw Road, from 2:00 8:00 p.m. on Sunday and on Monday, and then at the church on Tuesday, from 10:00 a.m. until the time of service. Those planning an expression of sympathy may wish to consider the Seton Cancer Institute of St. Mary's of Michigan. www.casefuneralhome.com