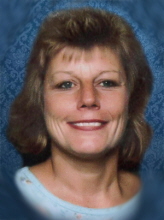 Linda Ann Tackman 1957 - 2018 Linda Ann Tackman, 60, was born October 5, 1957 in Bay City, Michigan and passed away on June 8, 2018 in Denver, Colorado. She was the second of eight children of Earl and Barbara Tackman. She married to Matthew Himmelein on May 2, 1975. Linda was known and loved by everyone for her giggle which turned into a full laugh. Linda enjoyed hiking and spending time in the mountains. This was her paradise. She also had a strong love for animals and children. She had a soft spot in her heart for the Homeless population and she enjoyed lending a helping hand. Her career was a fiber optic cable installer. She is survived by her mother Barbara Tackman; her children, Jayme (Oscar) Malacara, Nikki (Jay) Himmelein, Brandon Himmelein, and Joey (Cary) Himmelein; her grandchildren, Seth, Isaac, Matthew, Gabe, Lilly, Jeronimo III, Nicholas, Cassandra, Brandon, Emma, Chris, Mike, Cameron and Allesea; her siblings, Gary Tackman, Roger Tackman, Lloyd Tackman, Mary Edwards, Dan Tackman, and Paul Tackman, and numerous nieces and nephews. She is preceded in death by her grandparents, her father, Earl Tackman, and her brother, Kevin Tackman. Lindas family would like to thank the many people in Lindas life who were kind to her and brought happiness to her life. The family invites anyone who would like to attend a celebration of her life on Friday, October 12, 2018 from 2-5 pm at the Trillium Banquet Center, 6415 State St, Saginaw, MI 48603 In lieu of flowers, the family is asking that donations be made in Lindas name to the Denver Rescue Mission, 1130 Park Ave West, Denver, CO 80205, www.rescuemission.org/donate