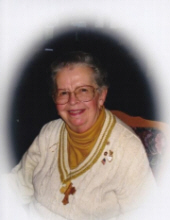 Lillian Elizabeth "Betty" Poellet of Saginaw, Ml died on Tuesday, December 13, 2016 at Covenant Hospital, Saginaw. She was 98 years old. Betty was born October 27, 1918 in Detroit, Ml. She was the daughter of Frank and Lillian (Rossiter) Stephenson. She married Allan Leonard Poellet on September 25, 1937 in Detroit, Ml. She had one son, Allan Leonard Poellet Jr. Her husband and son preceded her in death. Surviving are her daughter-in-law, Karen Poellet of Hubbard Lake, Ml; four grandchildren: Todd (Cheryl) Poellet of De Pere, Wl, Matthew (Natalie) Poellet of Cedar Rapids, IA, Ian Poellet of Portland, OR and Nicole (Rajeev) Krishna of Bexley, OH; nine great grandchildren: Benjamin & Nathan Poellet; Dana (Eric) Ratliff, Shawn, Bryce, Luke & Micah Poellet; Rhiannon Poellet; and Alexander Krishna; plus two great-great grandchildren: Jacob and Abigail Ratliff. Betty was an accomplished porcelain artist and began teaching professionally in the 1950s. Throughout the later half of the 20th century she was sought after, both nationally and internationally, for painting demonstrations and teaching engagements. She continued teaching private painting lessons into her 90's. She was known particularly for her floral work, with at least one of her rose pieces displayed at the World Organization of China Painters Museum in Oklahoma City. She was commemorated by the naming of the Betty Poellet Chapter of the World Organization of China Painters in Rochester Hills, Michigan. Betty was passionate about elevating china painting from a home-based craft to the level of professional artistry. A memorial and interment service will take place at St. Lorenz in Frankenmuth, Ml in the summer of 2017. Like Grandma always said to those she loved ... We never say Goodbye. We always say Auf Wiedersehen - Until we meet again.