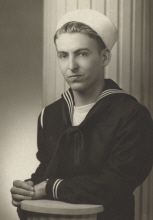 Hensley, Lewis L. Saginaw, Michigan Went to be with the Lord on January 8, 2017 at the age of 92 years. Born in Swiftrun, Virginia on March 23, 1924; the son of the late Anna (Lawson) and Lynnwood Hensley. He was a member of Community of Christ Church and was baptized there at the age of eight. Lewis retired from Saginaw Steering Gear Division with 46.9 years of service. He was a member of the local U.A.W. #699. Lewis served in the U.S. Navy in WWII; aboard the USS Bates D.E. 68 Destroyer Escort in the American, African, Mideastern Area on D-Day June 6, 1944. He later served aboard the USS Tuscon C.L. 98 Light Cruiser in the Asiatic-Pacific Theatre, seeing action in both areas. Lewis was a life member of V.F.W. Post 1859. Surviving are a son, Lynn (Debbie) Hensley and their son, Steven Hensley; a daughter Lisa Roberts and her son Dustin Roberts, his nephews: Mike, Pete and Mitch Martin. Besides his parents, Lewis was predeceased by a sister Naomi (Pete) Martin and a nephew Robert "Bob" Martin. Military committal service under the auspices of V.F.W. # 1859 will take place at 12:00 Noon Thursday, January 12, 2017 at Roselawn Memorial Gardens, 950 N. Center Rd. Those planning an expression of sympathy may wish to consider St. Jude Children's Hospital.