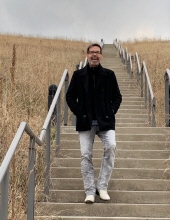 Kirk Ellsworth, 61, Saginaw County, attorney, who claimed he had lived the best life of anyone in the history of the world, passed away after his hard-fought battle with Cancer on Thursday, April 23, 2020.
He is survived by his wife Rebecca Raube-Ellsworth; two sons Kirk (Madilyn) and Kelly (Courtney); his mother Ruth; four siblings Jo, Patti (Mike) Bell, Charles (Debbie), and Ann (Kyle) Raske; mother-in-law Judith Raube, Chad (Nicholla) Raube and Shelly (Cindy); three grandchildren Sophia, Kate, and Jack; thirteen nieces and nephews; as well as countless other close family and friends. Kirk is preceded in death by his father Arnold and his brother Jerry.
A celebration of life memorial to follow at a later date. Memorial contributions may be made payable to Becky Raube for a tribute planned by Kirk’s family in his memory for the Saginaw County Juvenile Court, which was his passion.
To order memorial trees or send flowers to the family in memory of Kirk Ellsworth, please visit our flower store.
Send a Sympathy Card