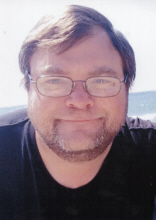 Falkenberg, Kevin Robert Saginaw, Michigan Our beloved husband, father, son and brother, passed away unexpectedly on Tuesday, November 24, 2015, age 47 years. He was born on January 15, 1968 in Amarillo, Texas, son of Jack and Christine (Jaynes) Falkenberg. Kevin married Sarah Bedore on October 21, 2003, she survives him. He was a graduate of Eisenhower High School, Class of 1986 and earned an Associate Degree in Science and Chemical Process Technology from Delta College. He was currently employed by Nexteer as a heat treating engineer in Plant #4. Kevin enjoyed traveling and road trips to "Great Grandma's Lake" with his loving family. Besides his Sarah and his parents, he is survived by his two daughters, whom he loved and cherished, Rebekah and Madilynn Falkenberg; his sister, Michelle (Michael) Barcia; his mother and father-in-law, Christene and Dominic Goergen; his sisters-in-law, Michele (Gary) Premo, Elizabeth Bedore and Susan Bedore; also many nieces, nephews, aunts, uncles and other special relatives and friends including his best friends, Larry, Mark, Jeff and Jerry. He was predeceased by his grandparents, Alvin and June Falkenberg and Jack and Florence Jaynes. Funeral service will take place at 3:00 p.m. Sunday, November 29, 2015 at W. L. Case and Company, 4480 Mackinaw Road. Rev. Robert Richards will officiate. Honoring Kevin's wishes cremation will follow. Friends may visit with the family on Sunday from 11:00 a.m. until the time of service. Those planning an expression of sympathy may wish to consider a donation to his daughters education fund in care of Sarah Falkenberg.