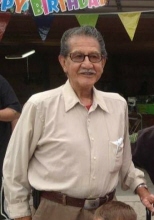 Beloved husband, father, grandfather, great-grandfather, great-great-grandfather and brother passed away peacefully on Tuesday, March 12, 2019 at St. Francis Home of Saginaw. He was 87 years old. John Martinez Samaniego was born on November 10, 1931 in Dallas, Texas to the late Fernando and Cruz (Martinez) Samaniego. He proudly served his country in the United States Army during the Korean War from 1952 - 1954. John received many awards and commendations including: the Korean Service Ribbon, Bronze Service Stars, Merit Unit Commendation, United Nations Service Medal, and the National Defense Service Medal. He met the love of his life, Dalia Rodriguez at a Baptismal Dance, went off to serve his country in the war, and returned to gain permission for her hand in marriage. John and Dalia were married on June 25, 1955; she survives him. He was employed with GM at Malleable Iron Central Foundry as a core setter, but held various other positions; retiring after 52 years of service. He was a faithful member of New Beginnings Ministries. John was an outdoorsman. He enjoyed hunting, fishing, camping, hiking and gathering around campfires. John also enjoyed reading and began a family tradition of spending each and every Labor Day up state. He was proud to have walked the Mackinaw Bridge on Labor Day for 43 years. Surviving are his wife of 63 years, Dalia Samaniego of James Township; five daughters and two sons, Dalia (Santiago) Garza of Saginaw; Juan (Amber) Samaniego of Saginaw; Joe Samaniego of Saginaw; Ofelia (Eric) Byers of Saginaw; Cruz Samaniego of Saginaw; Nancy (Greg) Hoffman of Alabama and Eleanor (Mark) Manwell of Saginaw; 33 grandchildren; 55 great-grandchildren; three great-great-grandchildren; and five sisters. Also surviving are many nieces, nephews, extended family and friends. He was preceded in death by a son, Antonio Samaniego; and a great-granddaughter, Olivia. A Funeral Service will be held at 6:00 p.m. on Friday, March 15, 2019 at Saginaw Valley United Pentecostal Church, 7877 Bell Rd., Birch Run. Rev. Kevin Leaman will officiate. Friends are welcome to visit with the family at the W. L. Case and Company Funeral Chapel, 4480 Mackinaw Rd., Saginaw on Thursday, March 14, 2019 from 6:00 p.m. to 8:00 p.m. and at the church on Friday from 5:00 p.m. until the time of the service. Burial and Military Honors will be held on Saturday and conducted under the auspices of the United States Army and American Legion Post #439 at Owen Cemetery, Thomas Township. Please share your thoughts and memories with the family at the funeral home, church or through www.casefuneralhome.com.