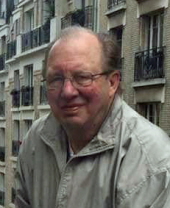 Passed away suddenly while exercising on March 27, 2019. He was doing what he loved up to the very end. Born in Lansing and raised predominantly in Bay City, he was a 1959 graduate of Bay City Visitation High School. After 8 proud years with the United States Air Force, he returned to the Bay City area as a Vietnam Veteran to begin his career and family. A marriage to Mary Lou Lemieux produced three sons: Roger Nickel (Bay City, MI), Thomas Nickel (New York, NY) and Timothy (Carolyn) Nickel (Canton, MI) as well as 7 beloved grandchildren: Garrett, Kyleigh, Devyn and McKenzie Nickel (Clarksville, TN) and Aleena Laperriere, Megan and John Nickel (Canton, MI). John moved with his sons to Saginaw Township in 1979 and lived in the same home for 40 years. He was an active volunteer with Saginaw Township North Little League, Can-Amera Games, and Eisenhower and Heritage High School Booster Clubs. He enjoyed coaching youth soccer and baseball teams while capturing many memories with his trusty Minolta camera. As his sons grew and began to stretch their wings, John was able to devote more time to his true loves, reading and running. Surrounded by a devoted group that were like family to him, his "running buddies" provided great joy in his life. The Nickel Family would like to personally thank these individuals for their support and contribution to his well-lived life. In the twilight of his professional career, John was employed at the Aleda E. Lutz VA Medical Center in Saginaw. Upon retiring, he immediately returned to service as a hospital volunteer. He enjoyed working in the service of fellow Veterans, and his humorous demeanor will surely be missed. John Nickel lived a remarkable life. He was devoted to his family and friends, was a model of respect and integrity in his dealings with others, and wanted very little of the common trappings desired by most these days. In an era of bigger, faster and more, he sought simple, calm and efficient. He leaves us too soon, but he leaves us better for our time spent with him. Friends may visit with the family at the W. L. Case and Company Funeral Chapel, 4480 Mackinaw Rd. on Saturday, March 30, 2019 from 3:00-8:00 p.m. A memorial service for John will follow at a later date. In lieu of flowers, memorial donations may be made to the Aleda E. Lutz VA Medical Center.