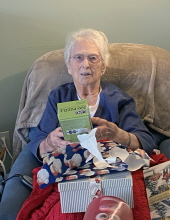 Beloved mother, grandmother and great-grandmother passed away, at the age of 90 years, on Tuesday, September 1, 2020 at her daughter’s home with her family at her side.

The daughter of the late John and Ruby (Foster) Clearwaters, Joan was born on August 2, 1930 in Joliet, Illinois where she graduated from Joliet Township High School with the Class of 1948. In January of 1953 Joan married Dale H. Werner and they shared 39 wonderful years together before he preceded her in death in 1992. Joan was a private bookkeeper for several years before she and Dale purchased and ran the first Business Card Express printing franchise in Downers Grove Illinois. They both retired in 1988 to their lakeside home on Beaver Lake in Michigan where she served as secretary and treasurer of the Beaver Lake Home Owner’s Association. She was a long-time member of the Spratt United Methodist Church where she served several years as president of the United Methodist Women. Joan enjoyed playing flute in a community adult band directed by her husband, Dale. She had a passion for crafting; especially making dolls, knitting, crocheting, quilting pictures and making blankets for every family member. Above all, Joan cherished spending time with her family and friends.

Honoring Joan’s wishes, cremation has taken place. Funeral arrangements have been entrusted with W. L. Case and Company Funeral Chapel. Those planning an expression of sympathy may wish to consider memorials to Saginaw Choral Society or Alzheimer’s Association Michigan Great Lakes Chapter.
To order memorial trees or send flowers to the family in memory of Joan Werner, please visit our flower store.
Send a Sympathy Card