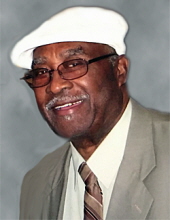 Our loving husband, father and grandfather went home to be with the Lord on Friday, April 9, 2021. Age 90 years.

James was born in the heart of the Great Depression in the Deep South to Dacy and Mary Lou (Adams) Richardson on September 12, 1930 in Sweet Water, Marengo County, Alabama. He was baptized at an early age in the Independent Baptist Church. James spent much of his formative years in Marengo and Mobile County, Alabama. He and two older siblings were raised by his mother and his stepfather, Connie Dixon, to whom two younger siblings were born. From his earliest years, James always worked hard at whatever he did, excelling primarily in math.

As a young man, "Baby Ellis", or “Ellis” as he was affectionately called by his mother and extended family, eventually settled, for a short time, in Lewisville, Arkansas after answering a 'help wanted' ad for truck drivers. It was there that he met the love of his life, Annie Lee Johnson. They married in Lewisville on December 11, 1956. As young newlyweds, they moved to Upstate New York in 1957, where his father Dacy had settled. After moving north, James and Annie would become parents and raised seven children.

James moved from Alabama to Arkansas to Utica, New York determined to provide the best life for himself, his wife, and his young family. He took advantage of every opportunity afforded to him and became a skilled laborer – first as a certified arc welder, then as a certified machinist. He worked his way up the ranks, beginning his work career as a boiler room assistant at Hart & Crouse Corporation. He eventually became a member of an emerging nationwide trade union within the AFL-CIO, the International Association of Machinists (IAM).
In the early 1960’s, he took a job as a welder at the unionized General Dynamics Naval shipyard in Groton, Connecticut where he perfected his labor skills. After a stint in Groton, James returned to the Utica area to work as an aluminum arc welder for the Cherry Burrell Company in Little Falls, New York. These experiences preceded his ten-year stint at the Pettibone-Mulliken Corporation, later known as Pettibone Corporation, a Chicago-based industrial crane maker in Rome, New York.

At Pettibone, James emerged as one of Pettibone's most skilled and versatile employees, utilizing his mathematical skills, along with his welding and machinist training. He furthered his education by earning managerial certifications from Mohawk Valley Community College in Utica and Rutgers University in New Brunswick, New Jersey. While living in New York, James was not a bystander in the ongoing Civil Rights movement. He stressed the importance of the movement to his young children. James would often have his children march alongside him in local demonstrations led by the family's church, St. Paul Baptist Church in Utica. During the 1960s, he also emerged as a prominent machinist/union leader in the IAM (later known as IAM-AW). As a union leader, James made history in 1967 by becoming the first African American President of the local IAM&AW union branch. As President, he represented his local union in meetings with prominent local, state, and national leaders and traveled across the United States.

The highlight of his career, as union President, occurred at the 1972 IAM&AW national convention, where due to James' exemplary parliamentarian skills, he was asked to preside over a meeting with the Congressional Black Caucus. Prominent Caucus members at the time included revered African American congressional leaders such as Shirley Chisholm of New York, Michigan congressmen Charles Diggs Jr. and John Conyers, and California congressman Ron Dellums.

In his continued work as a community activist, James was a founding member of the United People of Cornhill (later Cornhill People United) in 1972. He was instrumental in politically galvanizing the African American community in Utica, most of whom lived in Utica's Cornhill district. James routinely involved his children as volunteers in organizing his Cornhill community activities, which included events to allow citizens to add their voice to pressing issues of the day, attending political rallies, and managing a local summer lunch program to feed neighborhood children. The organization held conventions in 1972 and 1973 with James as the keynote speaker at both events.

During the 1970’s, James, who had taken on the task of completing family income tax returns, also founded Aljer Income Tax Service, a tax and accounting business. In addition, with the manufacturing industry on a decline in Upstate, NY, he made the decision move his family to Marengo County, Alabama in 1976. James relocated to Michigan and became a member of Zion Missionary Baptist Church in 1979.

Through the 1980's James continued to process business and personal taxes manually. With the high-tech world advancing, he switched to electronic paperless processing for income tax preparation in 1986 and began transmitting taxes online. He continued to run Aljer Income Tax Service for decades, becoming affectionately known in the Saginaw area as "Mr. Aljer."

Through the years, James remained committed to his family his wife and children. He was often seen sporting a Kangol, Stetson or Crown dress hat. A praying man, James could be found on bended knee every night before bedtime until he was no longer able to kneel due to advancing age and illness.

James embodied dedication and hard work, along with providing a sense of mission and purpose, which he passed this down to his children with all of his heart throughout his life. Among his most memorable and prolific one-liners was his charge to his children to do their best, never give up and "make it work." He loved cars and travel and stopping at car dealerships to check out the brands on the lot with his sons and grandsons was a favorite pastime. Each summer he logged thousands of miles, and taught all his children to drive, on numerous family road trips taken over the years.

Funeral service will take place at 1:00 p.m. on Monday, April 19, 2021 at W. L. Case and Company, 5700 Dixie Highway. Pastor Rodrick Smith will officiate with burial in Eastlawn Memorial Gardens. Friends may visit with the family on Monday from 11:00 a.m. until the time of service. Those planning an expression of sympathy may wish to consider Zion Missionary Baptist Church, 721 Johnson Street, Saginaw, Michigan 48607

To order memorial trees or send flowers to the family in memory of James Ellis Richardson, please visit our flower store.
Send a Sympathy Card