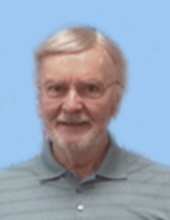 Our loving husband and father was called home to be with the Lord on Wednesday, May 6, 2020, at the age of 81 years. James (Jim) Ellsworth Griffin was born on his father's 29th birthday, March 24, 1939, to the late Helen J. (Brooks) Griffin and Variel Elijah Griffin in Pontiac, Michigan. He is survived by his wife Carol (Reimer) whom he married on April 19, 2003 in Gatlinburg, Tennessee. Jim graduated from Kearsley High School in 1957. He began an apprenticeship as a Tool Maker at AC Spark Plug in 1960. During his years at AC, he graduated from Flint Junior College with an Associates Degree in Engineering. Jim's successful career in engineering and sales spanned 43 years while working at Wilson Machine and later retiring from B&K Manufacturing in Bridgeport. For the past 3 years Jim was employed at Bronner's CHRISTmas Wonderland where he penned ornaments. Jim loved meeting and talking to people from all over the world and received many praises for his lettering skills. Jim and Carol found a wonderful church family at Bethany Lutheran Church in 2016. Jim was actively involved as an elder and was able to continue his life-long passion of music as the Choir Director. He also served on the building committee, helping design the new exterior of the church. Jim had many hobbies that kept him active throughout the years. He loved trains and railroading and even served as a Maître D' on the dinner train to help preserve the Saginaw Depot. Jim was also a proud member of the AC Male Chorus, performing at the New York World's Fair in 1964. He enjoyed the outdoors with many years of camping and deer hunting with his sons and brothers. Jim also loved golfing, traveling (especially to Montana), upholstery and sewing. Jim's outgoing and friendly personality earned him many friends all over the world. He has left a hole that no one else can fill.

A private funeral service for immediate family will take place. Pastor Mike Nitz will officiate burial in Roselawn Memorial Gardens. Those planning an expression of sympathy may wish to consider Bethany Lutheran Church.

To order memorial trees or send flowers to the family in memory of James E. Griffin, please visit our flower store.