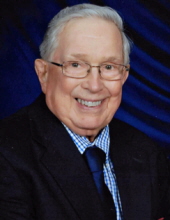 Jack L. Marcy
Freeland, Michigan
Beloved husband, father, grandfather, uncle, cousin and friend passed away with his family by his side on Sunday, September 6, 2020 at the age of 89 years. Jack was born August 11, 1931 in Saginaw, Michigan, the son of the late Myron C. and Lillian E. (Baxter) Marcy. Jack graduated from Midland High School in 1950. Jack proudly served in the United States Air Force during the Korean War. He married Ilah M. Lowrey on October 22, 1955 and she survives him. He retired from Dow Chemical Company in 1988 as a spare operator in the Power Department with 38 years of devoted service. Jack was a member of St. Peter Lutheran Church in Hemlock. Jack was a member of American Legion Post 0225 and a member of the Masonic Lodge Centre 273 for 65 years.
Surviving besides his wife Ilah are his two daughters; Cynthia A. (Gene) Reisig, Marsha K. (Peter) Lea; five grandchildren; Nichole M. (Mark) Beltz, Ashley M. (Jacob) McGill, Zachary R. Woods, Natalie K. (fiancé P. J. Lemanski) Woods, Samuel B. Lea; seven great-grandchildren; Hunter Woods, Sophia Woods, Harper Beltz, Beckett Beltz, Lauralei McGill, Waylon McGill and Emersyn McGill; as well as several cousins, nieces and nephews.
The thing he cherished the most was his family. Jack and Ilah were devoted to each other for nearly 65 years. He enjoyed taking his family on Michigan vacations, Tiger ballgames and especially enjoyed his trips to the Grand Ole Opry in Nashville, Tennessee. He faithfully attended his grandchildrens', or as he would say "the kiddies", athletic and school events. Grandpa was always their number one supporter and he was extremely proud of their accomplishments. He valued his relationship and the laughter he shared with his son-in-law's, Gene and Peter.
Jack was a hardworking family man who could fix anything around the house. He enjoyed woodworking and built beautiful pieces that his family will treasure forever. After working long, hard hours on swing shift at Dow Chemical, you would find him working in his yard. He loved his flowers and the summer gardens, which offered an overabundance of fresh fruits and vegetables, and it was a bit overwhelming for those who had to preserve it. Jack was a modest and generous man who was always willing to lend a helping hand to anyone who needed it.
Jack loved all sports but especially the Detroit Tigers. His wife Ilah and daughters, Cynthia and Marsha, were blessed to watch his final Detroit win, sitting by his side shortly before he left us.
A private family service with military honors has taken place with burial in Midland Memorial Gardens. Funeral arrangements entrusted with the W.L. Case and Company Funeral Directors 4480 Mackinaw Rd. Saginaw, Michigan 48603. Those planning an expression of sympathy may wish to consider St. Peter Lutheran Church, 2461 N Raucholz Rd, Hemlock, MI 48626.
To order memorial trees or send flowers to the family in memory of Jack L. Marcy, please visit our flower store.
Send a Sympathy Card