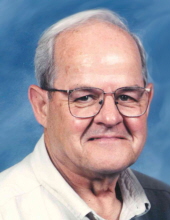 The son of the late Emil and Goldie (Sulcer) Colpean, Jack was born June 1, 1928 in Saginaw, MI. He graduated from Arthur Hill Trade School. He then proudly served three years in the Army National Guard. Jack went on to work for Steering Gear for 39 years, retiring in 1988. He married Delila Colpean; she survives him. They had three children; Jack Jr., Jill and Michael. They were members of Ascension Lutheran Church. Jack enjoyed watching St. Charles football games with his daughter Jill, watching NASCAR, hunting, fishing and going to the races with his boys, Jack and Michael.

A special Thank You to the great staff at Union Court and to Allisha with Heart to Heart Hospice for taking such wonderful care of Jack.

A private burial has taken place in Roselawn Memorial Gardens.
To order memorial trees or send flowers to the family in memory of Jack Allen Colpean Sr., please visit our flower store.
Send a Sympathy Card