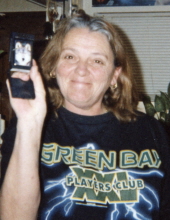 Beloved wife, mother and friend passed away on Wednesday, November 11, 2020 at her home, with her family and her dogs at her side; at the age of 63 years.

The daughter of the late Charles E. and Ann M. (Savage) Auclair, Gloria was born on May 10, 1957 in Palmer, Massachusetts. She was Baptized on May 10, 1957; had her First Communion on April 11, 1965; followed by her Confirmation on April 22, 1968 at St. Patrick Church, Monson, Massachusetts. Gloria married Tim Chapman in 2004, they shared 20 wonderful years together. Tim preceded her in death on April 14, 2008. She later married Westley Harding on September 10, 2016 in Las Vegas, Nevada; he survives her. Gloria worked for 20 years for LVI Environmental Services Inc./Northstar; imploding many iconic landmarks, hotels, resorts and casinos in Las Vegas; such as Stardust, Castaways, El Rancho, The Sands, The Aladdin, Desert Inn, Westward Ho, The Boardwalk and the Riviera. While working alongside her daughter, Erica, her final implosion was the Riviera before retiring. She was a member of Laborer’s Union Local 872, Las Vegas. Gloria had a goal of traveling and visiting the entire United States, she traveled to 48 of 50 States. She enjoyed crafting wreaths, diamond art, pictures and flags from wood; sewing quilts; gardening and canning. Above all, Gloria cherished the time spent with her family; especially her six dear rescue dogs: Ghost, Diva, Dana, Lambo, Sadie and Echo.

Surviving besides her husband, Westley Harding; are one son and two daughters: Timmy Brixey; Erica Chapman (fiancé: Matt Kemerer); Kelly Pettit; one very dear friend and quilting partner: Irene R. Bryant. Also surviving are one sister, many extended family members and friends. Besides her husband and her parents, Gloria is preceded in death by an infant sister.

Honoring Gloria’s wishes, cremation has taken place. A Celebration of Life will be announced at a later date arranged by the family. Those planning an expression of sympathy may wish to consider memorials to ASPCA, The Incredible Dr. Pol, Dr. Jeff: Rocky Mountain Vet, or any animal rescue of choice.
To order memorial trees or send flowers to the family in memory of Gloria Auclair, please visit our flower store.
Send a Sympathy Card