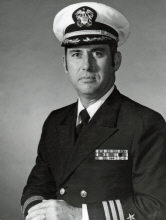 George A. Mallek Virginia Beach, VA formerly of Merrill, MI On Friday, March 1, 2019, George A. Mallek, CDR(Ret.), loving husband, father, brother and friend, went to be with his Lord and Savior.George was born on December 20, 1932 in Merrill, Michigan to Frank and Lillian (Shannon) Mallek. He attended Sacred Heart Catholic School and then enlisted in the US Navy. Upon completing his time in the Navy, he returned to Michigan and graduated from Michigan State University. Wanting to continue to serve his country, he entered the Officer Candidate School in Pensacola, FL and was commissioned. George earned his wings as a Bombardier Navigator in VAH 3 and joined VAH 11 in Sanford, FL.In 1962, George was selected to be an instructor in VA-42 for the latest combat jet, the A-6A Intruder and then reported to VA-35 aboard the USS Enterprise. He was awarded the Distinguished Flying Cross, Navy Commendation Medal and Meritorious Service Medal.After fulfilling his flight obligations he joined Naval Intelligence and served at various duty stations, to include: Air Intelligence Center, Norfolk, VA., Armed Forces Air Intelligence Center, Denver, CO., COMNAVAIR PAC, Coronado, CA., Air Intelligence Officer aboard the USS Hancock, Executive Officer Fleet Intelligence Center Pacific, FITCPAC, Coronado, CA., and then the Naval Photographic Interpretation Command in Washington, D.C.After serving his country for 30 years, George retired in 1981 and entered the private sector. He opened a series of businesses in Virginia Beach. Because of his love of people, he was successful in all ventures. He had a passion for travel and adventure which took him to the ski slopes of his beloved Rocky Mountains, African safaris to view big game, hikes of historical ruins in the Holy Land and souks of the Middle East.George leaves behind many family members and friends who will remember his love of life and laughter. He is preceded in death by his parents, brothers Daniel, John and Kenneth Smith. He is survived by his wife of 56 years, Ruth, daughters, Allison Bolling (Alex) and Melissa Mallek (Steve Drawert), sisters Mary Ballien and Janice Lauckner and nieces and nephews. Georgie, as he was known by his grandchildren, David Ulsh and his family, Stephen, Peyton and Olivia Bolling, will always remember the grandfather who adored them.He lit up the room with his warm eyes, quick laugh and wit. He turned acquittances into friends and friends into family and the only friend he did not have was the person he had not yet met. His life was more than what is captured here - he lived, he loved and will be greatly missed.The family wishes to thank the staff of Our Lady of Perpetual Help for their loving care during his final years.Services will be held on March 23, 2019 at 11:00 AM at Virginia Beach Community Chapel, 1260 Laskin Road, Virginia Beach. Reception at Village Hall, Signature Golf, Virginia Beach. Internment will be at Arlington National Cemetery at a later date.In lieu of flowers, donations may be made to The Alzheimer's Association.