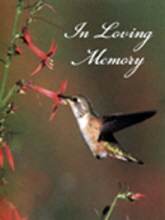 Wargo, Eunice Hemlock, Michigan Passed away on February 14, 2019 at Covenant Hospital at the age of 86 years. The daughter of the late Melvin Dahn and Lillian (Walker) Dahn was born on May 16, 1932 in Hillman, Michigan. She married Bernard Yuker in April of 1949; he preceded her in death on September 2, 1987. She later married Joseph Wargo on February 14, 1998, he predeceased her on September 12, 2010. Eunice enjoyed crocheting, cooking, crafts, flowers and bird watching, especially humming birds. She also enjoyed listening to church music. Above all, she loved and cherished her grandchildren and great- grandchildren. Surviving are her children, Donald (Jan) Yuker, David (Cindy) Yuker, Edward ( Deborah) Yuker, Mary Ann (Jeremy Dorrance) McClure, William (Nicolle) Yuker, Steven (Phyllis) Yuker and Jane (Mike) Perez; many grandchildren and great grandchildren; two sisters and two brothers, Ann LaFave, Ella ( Lawrence) Reed, Mike Dahn, and Elton "Obbie" (Ruth) Dahn. She was preceaded in death by a son, Dewayne Yuker and a daughter Nanette Yuker. Eunice was also predeceased by several brothers and sisters. A funeral service will take place at 1:00pm on Monday, February 18, 2019 at W.L. Case and Company Funeral Chapel, 125 E. Saginaw Street. Pastor Phillip Ortega and his wife Sandy will officiate. Friends may visit with the family at the funeral chapel on Monday from 10:00am until the time of the service. Honoring her wishes cremation will follow. Those planning an expression of sympathy may wish to consider memorials to the Wargo family.