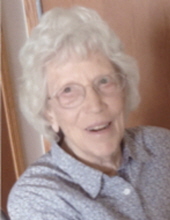 Beloved mother, grandmother and great-grandmother passed away peacefully on Wednesday, September 9, 2020 at Shields Comfort Care, with her family at her side; at the age of 101 years.

The daughter of the late Emil and Anna (Spitz) Mueller, Esther was born on February 15, 1919 in Saginaw, Michigan. She graduated from Arthur Hill High School. Esther married James F. Anderson, her honey Jim, on August 19, 1942 in Saginaw, Michigan. Jim preceded her in death on December 16, 1982. She was a long-time member of State Street United Methodist Church. Esther was a loving homemaker of the finest kind. Her favorite thing to do was feed people; family at holidays and anytime, many friends and new people she met. She enjoyed many happy times with family and friends at Pratt Lake and at home on Barnard Street. Her family and home were her most treasured possessions, her only gold was on her left hand.

She leaves so much love to all of her children: Marna (James) Balazer; Carlene Aja; Janette Anderson; grandchildren: Jacob Balazer (Chris Li); Andrew (Lindsay) Balazer; Emily Aja; Alec Aja; great-grandchildren: Ayla, Annabelle, Lincoln and Clara Balazer. Also surviving are many nieces, nephews and cousins, all of whom she adored. Esther was preceded in death by one sister and two brothers: Bertha Schmiege; Karl Mueller and Fred Mueller.

The family of Esther would like to extend a heartfelt thank you to Shields Comfort Care for their compassionate care of Esther.

Funeral service for Esther can be viewed at: here

A private funeral service will take place at W. L. Case and Company Funeral Chapel, 4480 Mackinaw Road, Saginaw, Michigan. Burial will follow at Oakwood Cemetery. Those planning an expression of sympathy may wish to consider a charity of your choice. The best way to honor the memory of Esther would be to feed another person or pass a kindness.
To order memorial trees or send flowers to the family in memory of Esther H. Anderson, please visit our flower store.
Send a Sympathy Card