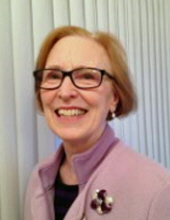 After a long-fought battle with cancer, Elizabeth Nagel, passed away, at home, with family, on March 3rd, 2020. The second daughter to Grace and Garland (Shanty) House, in Traverse City, Michigan.
Elizabeth graduated from Traverse City High School and then attended Central Michigan University, where she obtained both Bachelor and Master’s degrees. During her career, she was an Artist, Author, Illustrator, Educator, Investor, Administrator, and Businesswoman. With these roles often overlapping. An accomplished local artist, she excelled in multiple medias, winning awards for her creations at several exhibits. She started her own graphic arts business which was still a going concern up to the time of her passing. She was an accomplished creator and painter of large murals, and business signage, many of which can be viewed in the Frankenmuth area. She spent many years as a High School art instructor, working in Saginaw Township alongside her husband. She was a founding member of a local stock investment club, which was only dissolved at the end of 2019, after nearly 20 years in operation. A world traveler, who with her husband, brother and sister-in-law, visited Europe, Great Britain, Scandinavia, and nearly all fifty states including Alaska and Hawaii. A soft touch when it came to suffering cats, rescuing one from each neighbor and caring for them for over twenty years.
She is survived by Walt, her husband and partner of over 56 years, son Robert (Donna); grandson’s Alec, Brandon, and Colin; brother and sister-in-law Bob and Patricia. She is predeceased by her parents and sister, Susan
According to her wishes, cremation has taken place. A memorial service will be held at 2:00 p.m. on Tuesday, March 10, 2020, at W. L. Case and Company Funeral Chapel, 4480 Mackinaw Road, Saginaw, Michigan. Friends may visit with the family at the funeral chapel on Tuesday from 1:00 p.m. until the time of the memorial service. Those planning an expression of sympathy may wish to consider Flint Institute of Art.
To order memorial trees or send flowers to the family in memory of Elizabeth Nagel, please visit our flower store.
Send a Sympathy Card