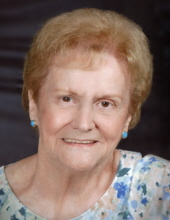 Our beloved, Wife, Mother, Grandmother & Great Grandmother passed away Thursday July 22, 2021. She was 86 years old. She was the daughter of the late Harry and Helen (Needham) Cavenaugh. Elizabeth (Betty) was born July 4th, 1935 in Washington D.C. and moved to Saginaw in 1942. She attended SS. Peter and Paul High School. She married Ronald N. Wachner on March 21, 1953. He was the love of her life and survives her. They raised three children together. Elizabeth enjoyed shopping, dancing, getting into mischief with her sister (Mary) and most of all spending time with her family. She was a school bus driver in the Bridgeport School District until her retirement in 1993. Ron & Elizabeth were members of St. Christophers Church.

If we ever needed a person to talk to or help with anything, you could always count on her support and guidance. She was very special to all of us and we will miss her dearly.

The Wachner family would like to thank the staff at Wellspring Skilled Nursing facility and Hospice in Frankemuth for the comfort and care they provided for Elizabeth during this difficult time.


To order memorial trees or send flowers to the family in memory of Elizabeth Ann Wachner, please visit our flower store.
Send a Sympathy Card