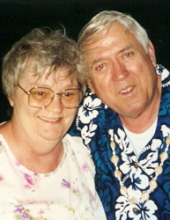 He was born October 27, 1939, in Bridgeport, MI, the son of Vern and Lillie Amy. He was the youngest of nine children. On July 30, 1960, he married Karen Lee Andrus. Edwin bought a small house located on a wooded parcel of land in Bridgeport, MI. Together with Karen it grew to be their lifelong home, where they raised their three children.

In 1960 he was hired by Miles Machinery and worked as a machinist. He remained with the company, which became Wright K. Technologies, until he retired after 42 years of service in 2002. He was a respected role model that many looked up to and sought advice from.

Edwin took joy in spending his time with his family, quilting with his wife, and enjoying 30 years of vacations and weekends at Wixom Lake on their lake front property. Edwin took pride in sharing his wealth of knowledge with his children and grandchildren.

Edwin is survived by his wife, Karen Lee Amy, and children, Floyd, Brenda, and Larry Amy, along with his 9 grandchildren and 9 great grandchildren, including their respective families.

A celebration of life will be held at a later date.
To order memorial trees or send flowers to the family in memory of Edwin James Amy, please visit our flower store.
Send a Sympathy Card