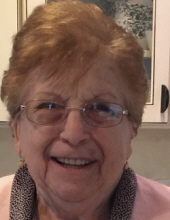 Our loving mother, grandmother and sister passed away on Friday, July 30, 2021 at Covenant Healthcare-Cooper. Age 86 years.

Edna was born on October 28, 1934, daughter of the late Gertrude (Glick) and John Good, in Oakley, Michigan. She married Arlin Shuster on November 3, 1951 on the Shuster Centennial Farm, in Henderson, Michigan. He predeceased her on July 20, 2007. Edna was a homemaker, raised six daughters and “her favorite son”. She spent her life lovingly raising her children. She always kept a house full of kids, whether it be her children or her children’s friends. Her house was always open for extras. Many sleepovers and parties through the years. The past five to seven years she posed as the loveable “Elf Edna” and gained a large fan base of many by dressing the part and posing at many holiday shenanigans. This was shared by her children with their friends.

Honoring Edna’s wishes, cremation has taken place and a private memorial service will be held at a later date. In lieu of flowers those planning an expression of sympathy may wish to consider a memorial donation in Edna’s name to the Shriners Hospitals for Children, 2900 Rocky Point Dr., Tampa, FL 33607 or donorrelations@Shrinenet.org
To order memorial trees or send flowers to the family in memory of Edna Pauline Shuster, please visit our flower store.
Send a Sympathy Card