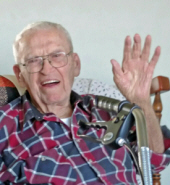 Kehoe, Duane "Hi" Merrill, Michigan Beloved father, grandfather, great-grandfather, great-great-grandfather, and uncle, passed away Friday, January 20, 2017, at his home, at the age of 96 years. He was born May 8, 1920, in Freeland, Michigan, the son of the late Vera (Garrett) and Daniel "Dan" Kehoe. He served with the US Army during World War II in the European-African-Middle Eastern Theater, earning three bronze stars. He engaged in farming most of his life. He was a driver for Koehler Brothers and had his own milk run. He married Allison Lucille Holt on December 20, 1939 in Angola, Indiana; she predeceased him December 16, 2012. He and his wife enjoyed traveling to Florida, going to flea markets, camping, and bike riding. He also enjoyed playing cards and yard games. His cheerful wave of greeting to all earned him the nickname "Hi." Surviving are two sons and one daughter, Charles (Dora), Gary and Jaqueline, all of Merrill; eight grandchildren, Charles (Cindy), Rich (Lisa), Heather (Torrey), Christy (Glenn), Farrah, Tony (Kristen), Brian (Tina) and Pat (Jo); twelve great-grandchildren and five great-great-grandchildren; several nieces, nephews, and their families. He was predeceased by two sons, Kenneth and Thomas, and by two brothers, Ray and Earl. In accordance with his wishes, he was cremated and private committal in Midland Cemetery will take place. Those planning an expression of sympathy may wish to consider the Jonesfield-Lakefield Volunteer Fire Department. Arrangements by W. L. Case & Company Funeral Directors. www.casefuneralhome.com