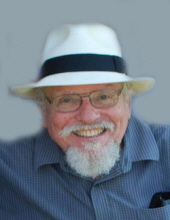 David Samuel Lewis
Saginaw, Michigan
Beloved husband, adored father and grandfather and loyal friend passed away Saturday May 30, 2020 at the age of 81 years. David was born May 9, 1939 in Wyandotte, Michigan, the son of the late Joshua Hugh and Doris (Cook) Lewis. In 1957, David graduated from Teddy Roosevelt High School in Wyandotte and then in 1961 from Albion College. David married Audrey J. Smith on June 15, 1963 at First Presbyterian Church in Saginaw. David and Audrey were three weeks shy of 57 years of marriage. He was employed as metallurgical and chemical technician at Saginaw Division (later Delphi Automotive), retiring after 30 years of service. He was a proud member of Pit & Balcony Theatre Company in Saginaw. David caught the performing bug from his wife and kids and his first audition was for the Giant in “Jack and the Beanstalk.” He did not get the part as he was deemed “too scary” by the director, something he was very proud of! His favorite roles included: the titular character in “Dracula”, Sir Evelyn in “Anything Goes”, FDR in “Annie”, and Marcus Lycus in “A Funny Thing Happened on the Way to the Forum”. Most recently he appeared as Santa in “Miracle on 34th Street”, Ebenezer Scrooge in “A Christmas Carol” and Farmer Zuckeman in “Charlotte’s Web”.
David really loved performing at the area’s community theaters (Pit and Balcony, Bay City Players, Midland Center for the Arts, Cass River Players), attending plays, musicals and concerts with his family, being his wife and kids’ number one fan whenever they tread the boards themselves, traveling to Europe multiple times with his wife Audrey, building models of planes and ships, reading science fiction, listening to classical and Dixieland music and all things nautical.
Surviving are his dearest wife Audrey, his children Laura and Gavin, his granddaughter Audrey (or A.C. as he always called her), his older brothers Hugh Lewis (of Port Stanley, Ontario), Dick Lewis and his wife Elizabeth (of Evanston IL), his nephews David, Philip and Justin Lewis, his niece Susan Heatherley and his sweet kitty Emmylou.
Due the world-wide health pandemic a private family memorial service will take place with burial in Oakwood Cemetery in Saginaw. An open memorial service will take place at a later date. Funeral arrangements entrusted to the W.L. Case and Company Funeral Chapel 4480 Mackinaw Rd.
To order memorial trees or send flowers to the family in memory of David Samuel Lewis, please visit our flower store.
Send a Sympathy Card