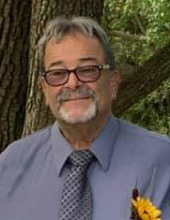 Beloved husband, dad, grandpa "Papa", and brother passed away unexpectedly on Wednesday, December 8, 2021, at the University of Michigan Health Systems. He was 74 years old. David was born on July 9, 1947, in Saginaw, Michigan to the late Russel and Dorothy (O'Dell) McGregor. He attended and graduated from Arthur Hill High School in 1965. Dave displayed the love of music at an early age, while accompanying his dad on vinyl records. As a young man, he became proficient on violin and attended Interlochen. Following high school and college at Central Michigan University, he enlisted in the U. S. Navy during the Vietnam War. Dave chose a career with the U. S. Postal Service as a city letter carrier, a position he held for 43 years. His love of music continued through adulthood. Dave entertained many as the lead singer and "fiddle player" of The Sauce Cats" zydeco band. After a lengthy engagement, Dave married the love of his life, Lydia (Parks) Enos, combining their families on September 15, 2019; she survives him.

A Memorial Service will take place at 11:00 a.m. on Wednesday, December 15, 2021, at the W. L. Case & Company, 4480 Mackinaw Road. Rev. Ted McCulloch will officiate. Friends are welcome to visit the funeral chapel on Tuesday from 4:00 p.m. to 8:00 p.m. and on Wednesday from 10:00 a.m. until the time of the service. In lieu of flowers, those planning an expression of sympathy may wish to consider memorials to the Wounded Warrior Project or Major Chords for Minors, a program promoting music lessons to children. Please share your thoughts and memories with the family at the funeral home or through www.casefuneralhome.com.

My love for you will live on until we are together again. Your loving wife, Lydia
To order memorial trees or send flowers to the family in memory of David McGregor, please visit our flower store.
Send a Sympathy Card