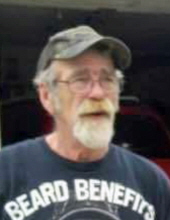 Passed away on October 20, 2020 at the age of 68 years.
The son of the late Williard and Helen (Thomas) Whitman was born on August 26, 1952 in Saginaw. He retired from the Palace of Auburn Hills after 27 years of service. He was a member of Calvary United Brethren Church. He enjoyed fishing and working on and riding motorcycles.
Surviving are his children: David (Vivian) Whitman, Vanessa Northrup, Lee Northrup, Sarah (Joshua) Terrian, Corey (Trisha) Whitman, grandchildren: David, Keisha, Arianna, Davian, Gunner, Bay, Kal, Isabella, MacKenzie and many great-grandchildren. He is also survived by his brother, Larry (Gloria) Whitman and sister Janey (Tammy) Lacklear-Stegall and many nieces and nephews. David was predeceased by his sisters: Kelly Williams and Marlene Kempt.
In accordance with David’s wishes, cremation has taken place and memorial services will be announced later.
To order memorial trees or send flowers to the family in memory of David James Whitman, please visit our flower store.
Send a Sympathy Card