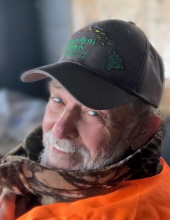 There was a joyous reunion in heaven on December 10, 2021 when our beloved Cal Thayer entered those pearly gates. He passed away peacefully with his family at his side after a lengthy illness. Cal is a loved family man who adored his wife, Diane Thayer, children, grandchildren, and so many friends and family members. He has left this world a better place for his kindness, sense of humor, and love of animals. We miss him dearly already.
Cal was born on September 23, 1944 in Flint to the late Charles and Frieda (Schipansky) Thayer. He graduated from Kearsley High School. He married Diane Jones on May 21, 1993; she survives him. He retired from General Motors after 36 years of service. Cal was an avid golfer, hunter and fisherman.
Surviving besides his wife, Diane are his children: Tiffany Jones, Brian (Lori) Jones, two grandchildren Shelby Jones, Levi Keinath, his sisters Donna Swerdan, Shirley (Carl) Norberg, Pat Borst, brothers: Ron (Nancy) Thayer, his sisters-in-laws Mary Ann Thayer, Barb Thayer, Daisy Thayer, and many nieces, nephews, relatives and friends.
He was predeceased by his brothers Chuck Thayer, Clarence Thayer, and Don Thayer, his brother-in-law Bud Borst and his buddies Beanie and Buster.
The family would like to thank Saginaw Senior Care and George for all the love and care they gave Cal.
A memorial service will take place at a later date. Those planning an expression of sympathy may wish to consider the American Cancer Society or the Alzheimers Association.
To order memorial trees or send flowers to the family in memory of Calvin E. Thayer, please visit our flower store.
Send a Sympathy Card