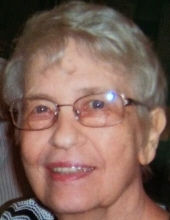 She was born June 24, 1929 the daughter of William A. and Sybil (McManus) Hasse. Beverly was the eldest of five children, three of which predeceased her. The youngest, Terry L. Hasse and wife, Mary Ellen, survive her. She graduated from Arthur Hill High School, Class of 1948, where she met the love of her life, James R. Trier. They were married August 11, 1951. Her husband of 68 years predeceased her. She was an accountant with Farm Bureau while her husband served in the Navy. Shortly after he returned they started a family, and Beverly became a full time homemaker. They moved the family to Traverse City, MI in 1981. After retirement, Beverly and her husband spent their winters in Florida and summers in Traverse City. Beverly loved music, painting ceramics, gardening and watching the Detroit Tiger games with her husband.

Private family funeral service will take place. Rev. Sue Hand will officiate with burial in Roselawn Memorial Gardens. Those planning an expression of sympathy may wish to consider Zion Lutheran Church, Saginaw, or the Alzheimer’s Association.

To order memorial trees or send flowers to the family in memory of Beverly Sybil Trier, please visit our flower store.
Send a Sympathy Card