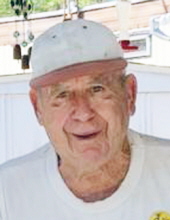 Benjamin Miles Carter
Saginaw, Michigan
Passed away November 20, 2020, at Covenant-Cooper. Age 88 years.
The son of the late Gladys (Abbe) and Miles Carter was born April 14, 1932 in Rust Township, Hillman, Michigan. He married Anna I. (Anna Belle) Pyle, April 18, 1953. His wife of 67 years survives him. Benjamin served in the U.S. Navy during the Korean War. He was employed by General Motors, Saginaw Steering Gear, Plant 2, retiring in 1994 with 30 years of service. He was a member of the Moose #82 and the Alpena Eagles Club. He enjoyed hunting, playing poker and tinkering around the house.
Surviving besides his wife, Anna, are two daughters, four sons and their spouses,
Adele Carter; Ray Carter; Lee and Sherry Carter; Dale and Rita Carter; Neal and Dawn Carter; Janet Gulliford and Jack; a son-in-law, Jerry Brandt; 15 grandchildren; 18 great grandchildren; two brothers and their wives, Lyle and Bonnie Carter; Lynn and Sharon Carter; many nieces and nephews. A son and a daughter, Benjamin E. Carter and Linda Brandt; five sisters, Emma Dice, Arlene Laurette, Thelma Wale, Dorothy Sharp and Lorna Cameron have predeceased him.
Private Funeral Service will take place with Military Honors under the auspices of the U.S. Navy and American Legion Post #439. Friends and family may visit on Monday, November 23, 2020, at the W. L. Case and Co. Funeral Directors, 4480 Mackinaw Rd. from 2:00-6:00 p.m. Pursuant to the current State of Michigan orders for funerals, indoor building capacity is limited to 25 people, face masks are required, and social distancing encouraged. We appreciate everyone’s efforts to help stop the spread of covid-19 in our community.

The funeral and committal of Benjamin Carter can be viewed at: here

To order memorial trees or send flowers to the family in memory of Benjamin Miles Carter, please visit our flower store.
Send a Sympathy Card